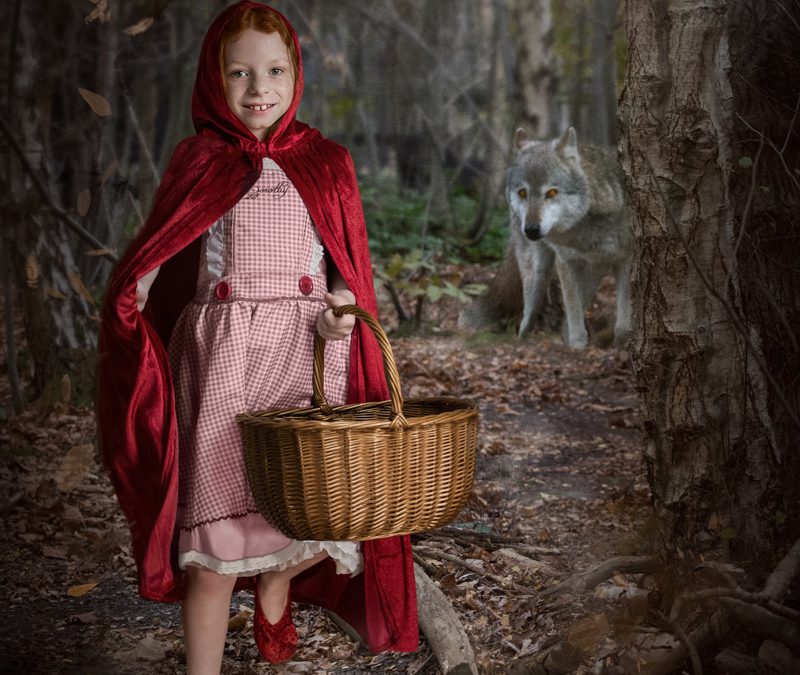 Many of my images include animals, which I have photographed over the years, so I though it was a good idea to talk about wildlife conservation, and give a little background information on the animals and location of the animal in each image.

This is a recent image of mine, based on the story of Little Red Riding Hood, showing “Red” happily skipping through the woods on her way to Granny’s house, completely unaware of the wolf behind her. 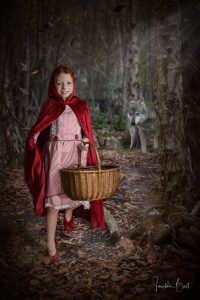 The image of the little girl was taken in my studio. She was a great little actress and had fun pretending to be skipping along the path through the woods to Grandma’s house in her red cloak. She was very enthusiastic and a joy to work with.

The background in the image is taken at The Wildwood Trust, a unique British wildlife park and conservation trust, which is near Herne Bay in Kent. The  Wildwood Trust has a large collection of animals which have been inhabitants of Britain for the last 10,00 years, including badgers, foxes, otters, pine marten and red squirrels. It also has animals that have been hunted to extinction in the UK, such as wolves, lynx and beaver. Recent additions include 2 European bears which were rescued in November 2014, from shocking neglect in a disused bear breeding station in Bulgaria where they were born. I will include them in another blog at a later date.

The main animal in the story of Little Red Riding Hood is the wolf, and when looking for a wolf to photograph and include in my image, I thought of the wolves at wildwood. The wolf in this image is called Mischka, and I was lucky enough to find out a bit about her, when I chatted with her keeper, Christine, who has know her for about 4 years. Mischka has hand-reared by a woman, and since then, she has a preference for female keepers

Mischka and her sister, Nadia were born into the main wolf pack, but had to be rescued from their den after flooding. A decision had to be made about what would be best for the cubs, and it was decided to hand rear the sisters. The life expectancy of wolves in captivity is about 17 years, and sadly, Nadia passed away earlier this year, after 15 good years at the trust.

Wolves are the largest members of the dog family. The most common is the grey wolf which was once found all over the Northern hemisphere. The fur is a grey-brown and is lighter on the chest & legs. Wolves are about the size of a large Alsatian. They blend in very well with their surroundings and in the wild they run long distances hunting in packs, usually for deer. Although wolves almost never attack humans, they are considered one of the animal world’s most fearsome natural villains and because of their tendency to attack domestic animals, many were shot, trapped, and poisoned, until they were hunted to extinction in the England by the 15th Century, and Scotland by the 17th Century.

The wild wolf pack at the trust now consists of just a brother & sister, Arkela & Amber.

The Wildwood Trust is a great place for a day out with the family. If you plan to visit in the Winter or after rain, I would advise wearing suitable footwear, as it can be a little muddy, but is a great place to stroll through the woods and watch the animals. For more information on the Wildwood Trust, and the wonderful conservation work that they do, please visit their website and like them on Facebook. Thanks.