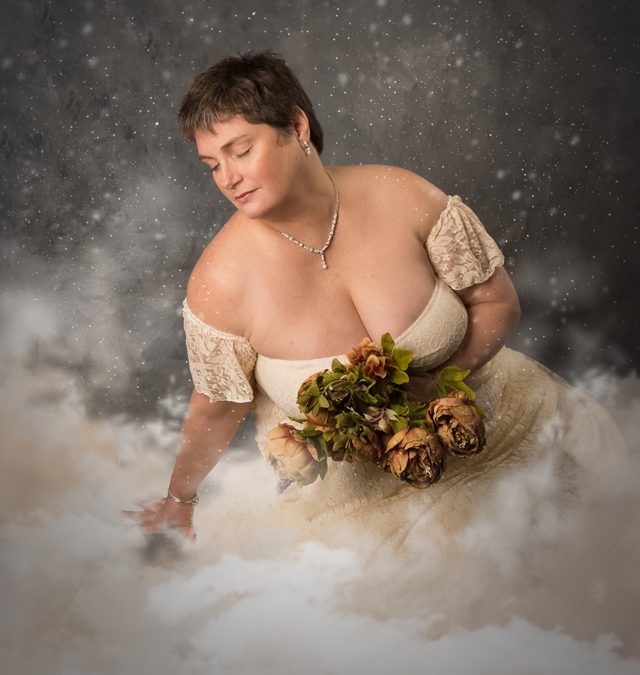 One morning in December 2017, I rolled over in bed and felt a tightening in my right breast. I’d been aware of a thicker area for a while, but this time I felt what every woman dreads – a definite lump. I called my GP and got an appointment the same day. After examining me, he didn’t think it was too sinister, but referred me to a specialist breast surgeon. We are fortunate to have private healthcare, so a few days later, I found myself at the one stop breast clinic at KIMS Hospital in Maidstone. Confident that it would be nothing to worry about, I didn’t think to ask my husband or anyone to accompany me and I faced several examinations and tests on my own. After a mammogram and an ultrasound during which a biopsy was taken, I was called back to see my consultant. I sat down, still sure everything was precautionary and was greeted with the words, “You almost certainly have breast cancer!”  Shell-shocked I drove home, with an appointment the following week to get confirmation. That was the longest week I have experienced, as I clung to the slim hope that he was wrong.

A week later, I returned with Andy, my husband, to get the results. My legs nearly buckled under me, as I climbed out of the car and walked the endlessly long, heavy-limbed walk to the consultants office. Once there, he confirmed what we feared, it was cancer. The area of thickening I had felt months earlier and not known to worry about was Ductal carcinoma in Situ (DCIS), which is an early form of breast cancer and covered a fairly large area of my breast. The lump was a cancerous tumour! Due to the size of the area of DCIS, a lumpectomy was not an option, I would require a mastectomy of my right breast.

Please take the time to familiarise yourselves with the possible signs of breast cancer. I was not aware of all of them, and had I visited my GP earlier, perhaps my breast would have been saved and things would not have progressed as they did.

The image below is from Breast Cancer Care’s website.

Christmas became an insignificant blur amongst tests and hospital appointments, and it emerged that  I have HER2 positive breast Cancer. This occurs in about 15-20% of breast cancers , where there are too many copies of the HER2 (Human Epidermal growth factor Receptor) on the cells. These receptors trigger the cells to grow and divide more rapidly.  You can find out more about HER2+ Breast cancer here.

Once it was confirmed that my treatment plan was surgery, chemotherapy, radiotherapy and targeted therapy (Herceptin), I decided to take control of some things. I was told I would probably lose my hair, so I decided to cut my long hair to make the change less traumatic and at the same time, help someone else by donating my hair to the Little Princess Trust. In the photos below, you can see the before and after.

As a photographer, I am very fortunate to have many talented friends, and my close friend Claire came all the way from Durham to see me. I don’t really like being in front of the camera, but I didn’t want to regret not having photographs taken before surgery changed my appearance. Claire used my studio and my camera to do a photoshoot of me, showing off “my assets”. I’m not one to show off my body, as I have gained so much weight over the years, so being photographed in minimal clothing was not something I would have been comfortable doing, but Claire was great and put me at ease and we had a lot of fun. It really gave me the opportunity to experience what it is like on the other side of the camera, which has helped me grow as a photographer too. There were a few tears along the way as we spoke of what was scheduled in the forthcoming year, but it was a wonderful positive experience and I’m very glad that I did it. I edited the images, but I haven’t looked at them since my surgery, but I wanted to share them with you. In one of the photos, I left the bruise from a biopsy, as I felt that it was part of my story. I love the photos and I’m so grateful to Claire for taking them for me.

Surgery was set for the 8th January, and on schedule I was admitted to KIMS and my right breast was removed. I was warned that although initial tests showed that the cancer had not spread to my lymph nodes, once the nodes are removed and examined, they can find areas which were missed during a needle biopsy, so worst case scenario would be further surgery to remove the lymph nodes. I spent a few days in hospital and then returned to see my consultant the following week to see what the next step would be. Unfortunately the results weren’t as expected, the biopsy of the lymph nodes they had removed had come back showing that the cancer had spread to my lymph nodes, so I was stage 3. The next step was a second surgery to remove the remaining lymph nodes and two weeks later I was admitted to the Spire in Tunbridge Wells for an axillary node clearance. After surgery I was determined to heal and be well enough to attend the Guild of Photography Awards just to get some normality back into my life. Unfortunately I then developed an infection and ended up in hospital for a week as soon as I returned home. Thankfully I got over all that, and was fit enough to have a portacath fitted as a day patient at KIMS in Maidstone in time for my first chemotherapy on 27 February. Here I am with my mascots Faith & Hope, who have their own Instagram account documenting my journey.

Finally I was ready for chemotherapy to start at GenesisCare in King’s Hill, Maidstone. The day of my first chemo arrived, and we awoke to the heaviest snow that had fallen in the UK for years.We left really early to make make sure we got there in time, and the usual 25 minute journey took 2 and a half hours! We even saw someone ski past the car at one point – not something you see every day in Maidstone, but it gave us a giggle on an otherwise fairly stressful day!
Everything has seemed very surreal, almost like I am outside my body and watching it happen to someone else. I’ve now lost most of the hair on my head , but being bald isn’t as bad as I thought. It’s certainnly a lot quicker in the shower, and think of the savings on shampoo and conditioner!! I’m well on my way to kicking cancer’s butt, and I intend to do it with a smile on my face and positive thoughts in my head. Yes, there are times that I feel awful, but I’m getting into a routine and I’m trying to keep going with my photography. I’ve visited the rhinos that I love so much and apart from a few days after chemo, it’s business as usual.
I am surrounded by some amazing people, and I am fortunate enough to be part of the photographic community, which gives me tremendous strength. I have received so many beautiful cards and gifts from friends letting me know they are with me. I feel truly blessed to have such wonderful friends and family. I am still taking bookings and doing shoots, although not as many as  I would usually do in a month, so that I can stay strong and ensure that I deliver my usual quality service to my clients. If you want to book a studio or location shoot, please don’t leave it until the last minute to avoid disappointment if I am fully booked. I love life, I’m living my life and I love my photography and I just thought I would leave you with a final word that I recorded as a message, which will hopefully leave you smiling at my silliness (yes, my kids are mortified!).

My friend Claire will be back to do a second photo shoot with me, so check back to see how we get on with that. Thanks so much for all your support and good wishes. And remember to check your boobs!!