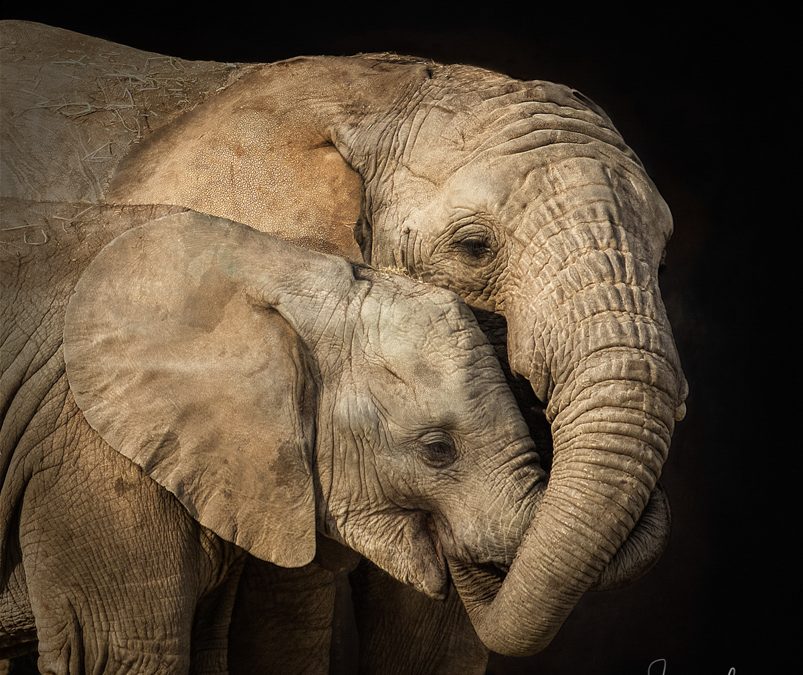 This is the second in my series of images which will be offered for sales as signed, mounted, limited edition, fine art prints, with all profits going to The Aspinall Foundation. All these images are 20×16″ including the mount, and are £120 each including postage within the UK. 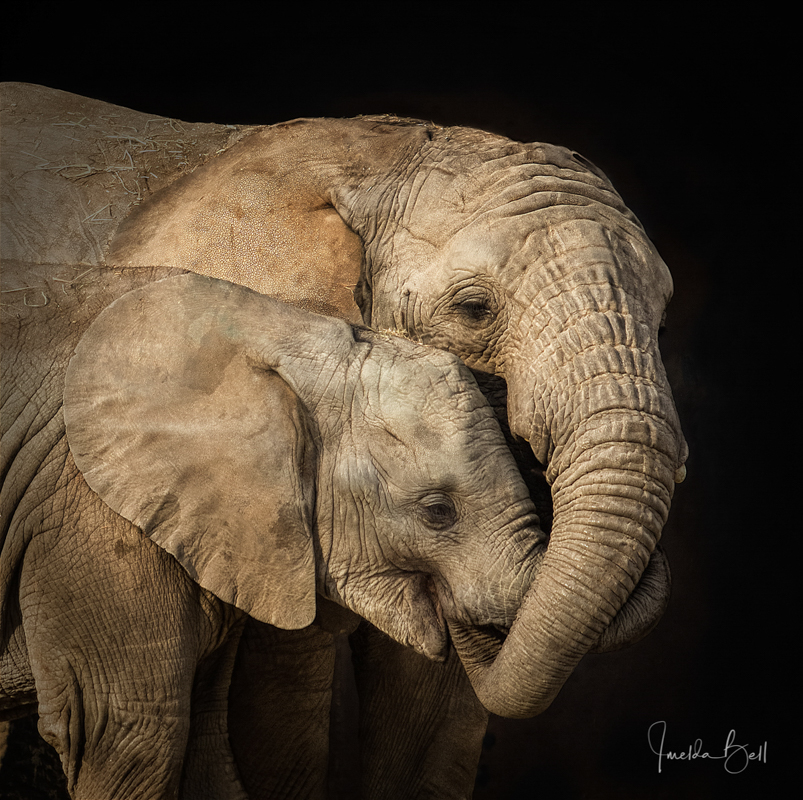 Elephants in the wild are heavily poached for their ivory, there numbers have declined from around 2 to 3 million post-war to around 600,000 today.Although there is a ban on the international trade in ivory, African elephants are still poached in huge numbers. Tens of thousands of are killed every year for their tusks, which often carved into ornaments and jewellery. China is the largest market for such products.

The image, taken in January 2016 at Howletts,  features 5 year old Mchumba and Mirembe, who will be 2 years old in June. I have called it “Love” as it looks like Mchumba is caring for Mirembe, in a brotherly embrace.

I spoke to keeper, Lyn about the the elephants at Howletts.

The larger herd, consisting of 10 cows and 3 bulls, is formed from 2 family groups. Mchumba is the son of the dominant matriarch of the herd, Masa, who was born in the wild in approximately 1969. Mchuma seems to know that his mother is in charge, and he can be a bit of a bully when it comes to the other young elephants and at times he is seen barging Mirembe about. Mirembe’s mother, Tammi, born in 1987, is the matriarch of the other family group, although of the two, Masa is superior. Jums, the bull elephant is father to both of them.

Masa gave birth to Mchumba (which means twin, as he had a twin who was stillborn) at the age of 42 years. In captivity, cows are fertile into their forties, but in the wild this can be into their fifties. Bulls mature at around 12-14 in captivity, in contrast to around the age of 20 in the wild. The lack of competition for a mate, leads to everything happening earlier in captivity. Jums will eventually go to Spain, and a new bull will be sent to Howletts, so that a new bloodline can be started.

I asked Lyn some questions about the Elephants:

I once heard a keeper come down to check that the elephants weren’t too cold. How do you tell if an elephant is cold?

Just like humans, they shiver when they are cold. They don’t like the wind or the rain.

What do you do if you see they are cold?

We move them from the paddocks indoors, where it is warmer.

How often are the Elephants fed?

They are fed a constant supply of food. They are given a variety of root vegetables, which comes from a local farm. They also have a supply of hay and branches to snack on throughout the day.

With that amount of food consumed, they must produce a lot of manure. How much do they produce a day?

They produced about 2 tonnes of manure each day.

What do you do with all that manure?

It is all taken a large manure pile, which then goes to be used as fertiliser at local farms.

I have recently been followed on twitter by Walmestone Growers who as well as supplying local restaurants and box schemes, also supply Howletts and Port Lympne.

If you would like to see these amazing animals for yourself, a visit to Howletts or Port Lympne is a fantastic family day out, and you will be helping to save wildlife through the purchase of your entrance ticket. A variety of tickets are on offer, so have a look at the websites to see which suits you best.

The foundation is grateful for any donations received, so please see their website if you wish to make a donation.

Please remember that it is our responsibility, living on this planet, to educate future generations and to help ensure that the animals that exist today are still here for tomorrow.